Growing up poor in Bonito, Italy, Salvatore Ferragamo began his career as a shoemaker before he was barely a teenager. Immigrating to America in 1915 at the age of 16, his work would soon help invent the glamour of Hollywood’s silent era as he created shoes for iconic films including The Thief of Bagdad and The Ten Commandments and for stars including Gloria Swanson, Mary Pickford, and Douglas Fairbanks, many of whom became his friends. Overcoming a Depression-era setback, Ferragamo rebounded and would define mid-century elegance for performers including Audrey Hepburn, Marilyn Monroe, Bette Davis, Rita Hayworth, and Ingrid Bergman — all while embarking on a love story and warm family life with his wife, Wanda, and their six children.

In SALVATORE: SHOEMAKER OF DREAMS, Academy Award©-nominated, and BAFTA nominated filmmaker Luca Guadagnino (Call Me by Your Name, A Bigger Splash, Bertolucci on Bertolucci) tracks Ferragamo’s life from humble beginnings to California and to a storied studio in Florence, Italy. With Emmy©-nominated actor Michael Stuhlbarg (Call Me by Your Name, The Shape of Water) narrating Ferragamo’s 1955 memoir; a trove of 100-year-old archival footage; an extraordinary “shoe ballet” created by stop-motion artist PES; and incisive commentary by Martin Scorsese, Manolo Blahnik, Christian Louboutin, Vogue Creative Director Grace Coddington, Variety Film Critic Todd McCarthy, Wanda Ferragamo and Wanda and Salvatore’s children and grandchildren, SALVATORE: SHOEMAKER OF DREAMS is a portrait of a man whose vision, passion, and craftsmanship made him “shoemaker to the stars,” an architect of Hollywood magic, and an enduring cultural, fashion, and artistic influence.

Some Italian and French with English Subtitles

for smoking and a suggestive reference 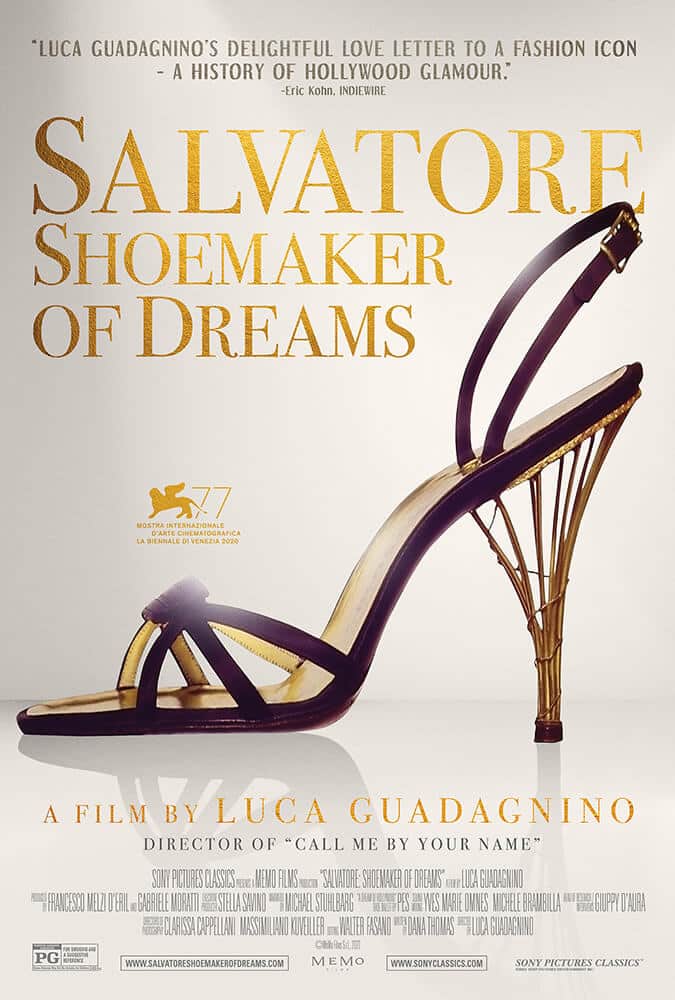 “Even if he couldn’t summon the experience of walking in Ferragamo’s shoes and getting to know him deeply, Guadagnino makes one appreciate the shoemaker’s indelible footprints from afar.”

“Guadagnino’s carefully and lovingly detailed history lesson, free of stylistic flourishes, is as satisfying and methodical as that red shoe–making.”

“More a sensible pump of a doc than a flashy stiletto, the film nonetheless offers plenty to delight fashionistas, with particularly welcome detail on the practical craftsmanship of Guadagnino’s fancy (and often fanciful) footwear.”