A one-night-only event celebrating the 20th anniversary of the Concert for George, a star-studded 2002 concert honoring the music of George Harrison.

Directed by David Leland (whose credits include the feature Wish You Were Here, HBO’s Band Of Brothers and the Traveling Wilburys video “Handle With Care”), CONCERT FOR GEORGE captures stunning renditions of some of the most significant music of the 20th century, including “While My Guitar Gently Weeps” (featuring Clapton on guitar, McCartney on piano and Starr on drums), “Taxman” (performed by Tom Petty and the Heartbreakers) and “The Inner Light” (covered by Jeff Lynne and Anoushka Shankar). Lynne, Harrison’s longtime friend and collaborator, produced the audio elements of the concert, while Clapton oversaw the entire proceedings as Musical Director.

CONCERT FOR GEORGE has been certified 8-times platinum by the RIAA since its initial release as a 2-DVD set in November 2003 and earned a 2004 Grammy® Award for Best Long Form Music Video.

Tickets for the screening are at Regular Ross Prices 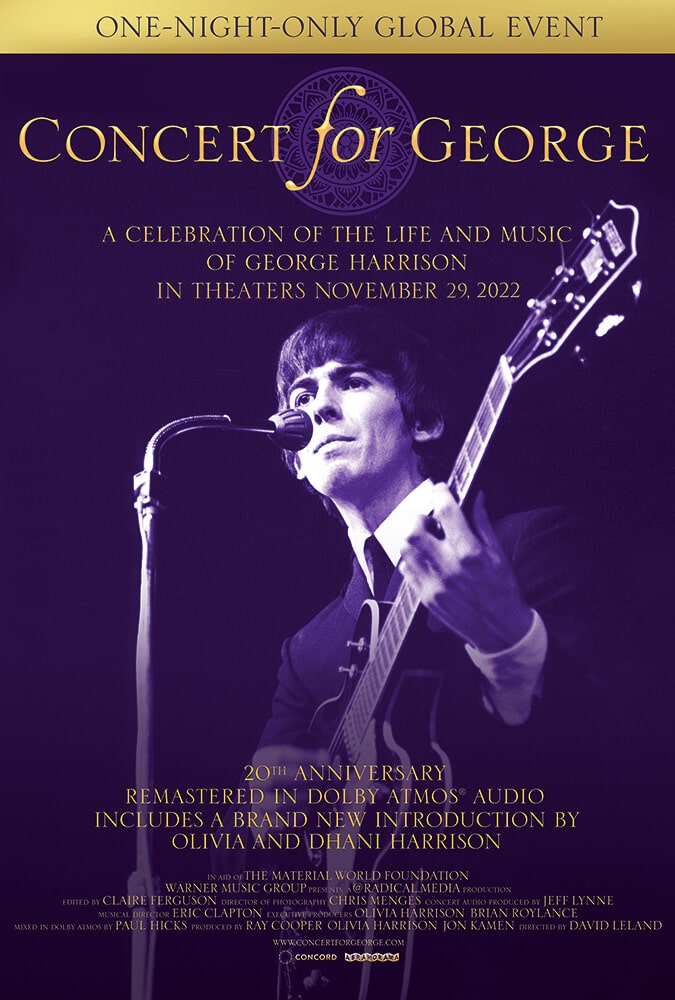 “The sweet, solemn music of George Harrison… has rarely sounded more majesEc than in the sweeping performances of the enlarged star-studded band that gathered in London at Royal Albert Hall on Nov. 29”

“The fondness that everyone in Eric Clapton’s all-star band has for the former Fab shines throughout a tribute that retains the sincerity and simplicity of Harrison’s music.”

“It’s hard to think of a more fiRng tribute to a man who, despite being in the world’s biggest band, spent so much of that Eme in the shadows of his fellow players. George’s songs take centre-stage here, lovingly arranged by musical director Eric Clapton to accommodate as many famous friends as possible.”